Why Man-Made Climate Change Is A Messaging Misnomer 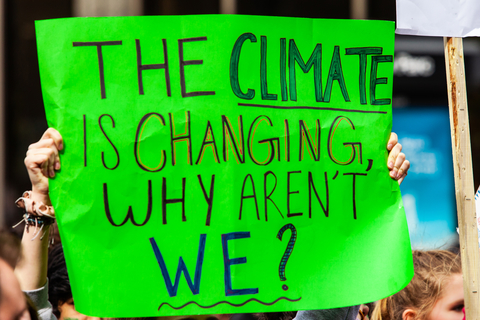 Don't worry. I haven't gone off the deep end and gone into denial about the scale and urgency of reducing carbon emissions. I do, however, have a bone to pick about how we communicate the threat of the climate crisis and inspire action among 7.5 billion people.

I'm hardly the first person to point out that for all of the brainpower that exists behind tackling the climate crisis, we sure are maladroit when it comes to advocacy. Not to dismiss people who spend their lives dedicated to studying climate science, working for non-profits to educate and change behavior or those who go into public service because of their passion for the issue. They've done a thankless job on behalf of humanity, and they've made many inroads on issues like land use, water conservation, and habitat protection.

Unfortunately, the Enlightenment Age informed belief systems instilled in so many of these earnest people has gotten in the way of something more critical--enacting wholesale change that has little to do with facts.

Altering the famous James Carville line, "It's the story, stupid."

Throughout history, the two prime drivers of behavior change in humans have been self-interest and fear. While I'm sure we all wish homo sapiens were more noble creatures, time and time again we've proven otherwise. The community fighting to save humankind hasn't been able (or willing) to tap into either of those veins.

Neuroscientists and psychologists have studied drivers of human behavior ad nauseum. Marketers and political consultants have been perfecting these arts for thousands of years, even before those jobs had titles.

It's true; cleantech industries are already creating hundreds of thousands of new jobs to replace those coal mining and hourly-wage jobs lost to technology. But that can't be the main thrust of our story; it's an adjunct.

I cringe at names like 350.org to represent carbon emissions zooming past 350 PPM. Ask the average person on the street what it means, and you'll get a shrug. Why?  Because 350 parts per million is a fact-based argument designed to appeal to the intellect in the frontal lobe, not the amygdala, hypothalamus and the reptilian brain that processes emotions and the survival instinct.

Please! Stop with the numbers! 1.5C or 2C will change our climate, but it won't change opinions and behavior, or at least not in time to do anything about it.

Our Language Is Counterproductive

Let's start with the phrase "man-made climate change." That's a word jumble that must have come out of symposium because it certainly isn't a term designed to inspire or fear. Let me point out just a few of the reasons it's wrong.

Here's How The Real Culprits Use Story To Win

If you are a resource-extraction based company, you know how to use the elements of a story to benefit your bottom line. It goes something like this:

Humans want a more prosperous future. That's why Company X delivers (resource) to you. Unfortunately, radical environmentalists have their own agenda and it could harm all of us by shutting us down. Their tales of doom are false, and we know because we're doing more to protect the environment than ever. We're committed to a bright future where the economy AND the environment can cohabitate successfully.

To recap, they've used a plotline that has driven stories for thousands of years.

This story is the Bible, The Odyssey, and Norse mythology all wrapped up into a neat package--and it's useful.

Meanwhile, here's our inept attempt to tell a story about the climate crisis

Whew! Where do I sign up? Is it any wonder progress to reduce carbon emissions is so slow?

The Plot Must Be Binary

Nuance is our enemy. At 400 PPM (yes, I'm using a fact, but only to illustrate my point), the planet has reached a critical tipping point. That's why we should frame the danger in clear, binary terms. We either survive, or we don't.  While I'm not in favor of shaming each other because it's counterproductive, you also don't get a dispensation because you ate grass-fed beef instead of grain-fed beef.

Scientists can lead this thrust because they are trusted validators. "The planet doesn't distinguish between good and bad intentions. If we keep on the same path, the result is clear." Climate change messaging must be an either-or choice.

The Enemy Must Have A Face

A winning story frame has to include a culprit trying to stop the hero from completing his/her journey. Fortunately, if we stop shooting ourselves in the foot by painting "us" as the problem, there are no shortage of antagonists who can play the role of Snidley Whiplash tying humanity to the train tracks.

But for this story frame to work, we need to put names and faces to the enemy, just as we have for every binary global conflict in history. We need individuals to be representative of the villainy caused by greed over the last 150 years.

Start with corporate executives. Allowing them to hide behind their company shield needs to end. The company didn't drill for oil. People made those decisions; so let's hold those people responsible.

The list goes on, but you get the idea. Every despot or anyone who became obscenely wealthy while leaving a mess behind for the rest of us needs to be the ones we hold accountable, not the shrinking middle-class family driving a 15-year-old gas guzzler. Stop the self-blaming and point the finger at the real culprits.

Give people a focal point for their anger. Tell them these millionaires and billionaires (Bernie Sanders Brooklyn accent is optional) are laughing at you because they're getting rich while your family is getting stuck with the bill. These people have opposed anything and everything that would compromise their profits and have no qualms about lying to do so. They knew burning fossil fuels was a danger to the planet 40 years ago and chose to lie about it to protect short-term profits.

When they say "radical environmentalists," the response is not to defend ourselves or state the facts. We are now in a binary existential fight to the death; we need to throw even more incendiary rhetoric back at them, like "planet killers," "humanity destroyers," or "hurricane creators." People might not want to sit in a tree with a hippie and pee in a bucket, but they sure as hell don't want to be associated with the destruction of humanity either.

Ultimately, these greedy tyrants will be responsible for more deaths in the 21st century than Hitler, Stalin and Tojo combined killed in the 20th. Why have they been able to escape the notoriety and accountability?

Counter Their Fearmongering With Even Greater Fears

Perhaps the most outrageous statement made in the history of discourse is when oil companies tell middle-class families carbon regulations mean higher gas prices as if they had no power over it. Even worse, the environmental community then proceeds to bite the hook and argue how much the price of gas will change.

If the oil companies are going to peddle fear, we need to trump it with something direr. When they scream higher gas prices, we need to scream back higher food prices and shortages because of their greed-driven pollution. People can live without a car, but they can't live without food. Make them responsible for high food prices and scarcity.

It's frustrating to watch how the climate-lying cognoscenti coordinate their message of denial so well. The question is why we aren't doing likewise. Tragic as Hurricane Dorian was, it was an opportunity to create our echo chamber tracing this disaster right back to the greed that created it. We know these episodes are only going to increase as time goes by, whether it's flooding along the Mississippi, drought in the Southwest or more intense hurricanes along the East Coast.

Every one of these weather-related disasters along with every crop failure, is fodder to point out the enemy and drive the message relentlessly. We need to synch like an orchestra to make our sound unmistakeable for our audience. When they associate the climate crisis with the opening lines of Beethoven's 5th, that's when you know you've turned the tide. Thanks, Exxon-Mobil! That hurricane saved me the demolition costs.

And For Heaven Sake, Let's Get Our Story Straight

The story we need to use to overcome the deceit and misdirection from the fossil fuel industries and combat the climate crisis has been in front of us all along. It's the story of Adam and Eve in the Garden of Eden.

To sell it though, first, the polluters have to be synonymous with the serpent. Once we are immune to the serpent's lies, we can ignore their hollow threats and break the cycle of addiction.

We followed a similar playbook successfully taking on Big Tobacco. It worked because we didn't blame smokers for the problem, although we graphically showed them the harmful effects of smoking to change their behavior.

Anti-smoking commercials didn't bother with the facts because the facts about smoking were well known. They used the testimonials of disfigured former smokers to either get you to stop smoking or not to start in the first place. (Sound familiar to what I'm advocating?)

Eventually, Big Tobacco was brought to heel by damning evidence revealed in the courts, but also because they lost most of their friends in Congress who were no longer willing to shill for companies whose brands were held in contempt by the public and even from their consumers.

To those who yearn for a more civilized discourse of yonder days and tsk tsk this strategy, I say go home and read a history book. You won't find gentlemen of integrity there either.  Meanwhile, leave the critical work of winning to the rest of us willing to get dirt under our nails. You can thank us later, like when you still have a home and a front yard, unlike the millions of uprooted migrants who will be leaving their homes thanks to rising sea levels.

We've run out of time for incrementalism so let's start talking like it.