Is Twitter for selling or shouting? It's a question I hear from mission-driven companies in the climate tech sector, especially from executives born before the first web browser.

“We’re a science-based company,” says the typical climate tech CEO. “Why jump in a pool teeming with partisan sharks and lifestyle influencers on a platform with an oily sheen of misinformation floating across the top?”

It's a reasonable train of logic. If you aren't running for political office, not in the entertainment business, don’t want to discuss sports, or aren’t angling to be paid by brands to influence your followers, what's the point?

The Pew Research Center has just released new data on the behaviors and attitudes of U.S. adults on Twitter that can answer some of those questions.

Other demographics of note:

Breaking those numbers down by age is more revealing. While fully 53% of Twitter users aged 18-29 said they use the service foremost for entertainment, only 28% of those aged 50+ were primarily interested in entertainment. Those 50+ users cited "staying informed" (25%) as their top reason to log in to Twitter. Only 15% of those aged 18-29 cited staying informed as their most important reason to scroll.

Having An Account Is Not The Same As Being Active

There’s an old aphorism that 20 percent of the people will end up doing 80 percent of the work. That formula certainly holds when it comes to who's actively using Twitter instead of those using the platform passively.

Almost two-thirds (64%) of Twitter users say they mostly use it to see what others say. In contrast, only seven percent say they use it mainly to express their own opinions.

Pew's analysis from June-September 2021 of over 1,000 Twitter users supported the earlier survey by showing the most active 25% of Twitter users produced 97% of all tweets. Let’s call them the ‘elites.’

What kind of content is the most active 25% sharing?

In Pew’s analysis from June-September 2021, original posts comprised just 14% of tweets from this ‘elite’ cohort of users. Yes, you read that right. Only 14% of the most active 25% of tweeters produce original content. The remaining 86% of their posts were either retweets (49%) or replies to other users (33%).

What does that mean for your brand? There’s a huge opportunity to find a well-educated audience eager for information about the world around them for your original content.

How Does The Math Work?

Let's say you have a U.S.-based climate tech company that's looking to connect to your domestic audience. It doesn’t matter whether you’re selling solar panels to homeowners or batteries to utilities; as the engineers say, “the math is the math.”

Of the 330 million users of Twitter, there are only 70 million accounts in the U.S. and only 36 million daily users. Using data from FinancesOnline.com, the demographic breakdown would look something like this: 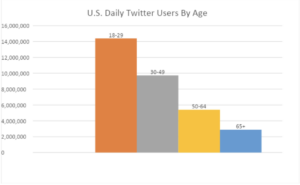 It’s also worth noting that Twitter users have achieved higher levels of education than the general public at large. Fully 42% have at least a four-year college degree, and another 26% have some college background, according to Pew and Statista.

At a glance, it would appear Twitter is fertile ground for a B2C company in the climate tech sector that is selling consumer goods to a heavily urbanized demo. Yet, the picture is more complex.

Remember, over half of the 18-29 cohort said they primarily use Twitter for entertainment. They aren't likely targets to engage with your brand unless you're selling products made from captured CO2, EVs, or sustainably-made textiles.

By and large, 18-29-year-olds aren't CEO's or deep-pocketed investors, but they are essential because they are digital citizens who like to share information. Recall, among the 'elite' group of Twitter users, nearly half their tweets are retweets from people, organizations, and brands they trust.

By removing Twittizens aged 18-29 who say they primarily follow celebrity gossip and sports from the equation (53%), there's a very appealing target universe of 18,406,800 that's much more B2B friendly. 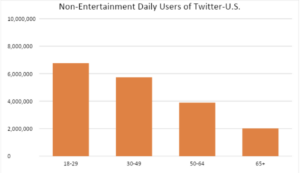 It can be daunting for a climate tech company to jump on Twitter if the metric for success is follower numbers. Don't expect to see subscriber numbers like former President Barack Obama (130 million) or Justin Bieber (114 million).

But follower numbers aren’t the best way to determine success on Twitter. Remember, your brand isn’t supposed to be for everyone; it’s for a select few. And if you want to dominate the Twitter platform, all it takes is diligence and creativity (plus a good story).

How Often Is Enough?

There are about 6,000 tweets sent out every second of every day, and the average tweet has a lifespan of 15-20 minutes. Does that mean your brand is shouting into a black hole? Not necessarily.

At an average of 11 minutes per visit, Twitter ranks second only to YouTube in the average duration of social media visits. Multiply those 11 minutes by the number of times high-volume tweeters log in to the site daily, which ranges from "once or twice" to "too many times to count." You have a pretty high correlation of your content meeting the audience.

If you're not sure when is the best time to tweet, some algorithms can help you plan the optimal time of day and days of the week to tweet to have the most significant reach possible.

And while there's no hard and fast rule about the exact number of times to tweet per day, high volume tweeters average 65 tweets per month or slightly more than two times per day.

Lesson #2: Unless you commit to a daily regimen, your tweets will end up in the vastness of space.

What’s A Good Number Of Followers?

Lesson #3: It's a fallacy that you need hundreds of thousands of followers to succeed on the platform.

The final difference between ‘elite’ tweeters and the rest of Twitter is the amount of engagement they get with their followers. Elite tweeters get an average of 38 engagements every month, or 456 every year, compared to the Twitter majority, who get zero engagement.

That's what effective social media marketing looks like. Your following grows exponentially, as does your reputation.

If you run a B2B climate tech company in an obscure industry like fusion, water remediation, or safer chemicals, 456 nods from colleagues and early adopters are like a standing ovation at the Hollywood Bowl.

Lesson #4: Intensity matters more than the size on Twitter

If you’re going to spend time and money on a social media platform, make sure you are the dominant brand in your industry, whether that’s B2B or B2C.

Forty percent of Twitter users say they have purchased a product after seeing it on Twitter. The key for B2C climate tech companies is finding an audience that cares about climate and living a sustainable lifestyle. You can start by using hashtags within Twitter’s search engine to find like-minded people and other content providers to share your story.

B2B climate tech companies have a more extended sales funnel and are unlikely to benefit from impulse buying. The goal for these pioneers is to build confidence and trust in their brand.

Besides becoming the ' go-to ' person in your industry, there's also an ancillary benefit to producing original written and video content. Remember, 90% of all purchases begin with a search on Google or Bing, and those search results include Twitter content.

Search engine algorithms rank you higher by participating on social media platforms like Twitter that generate engagement. Your company gains online influence. And the more places Google's spiders find your content, the more you will come to dominate your niche with multiple listings that connote credibility.

Like most answers in marketing, the answer is, "It depends."

Every social media platform has its advantages. Your goals as a company should drive your decisions about how or whether to deploy social media. Look, it's not absolute that your brand has to be on any social media platform to be successful. But by the same token, if you're standing in an airport terminal, you don't have to get on a plane to get where you are going, but it sure helps.

While Pew's data is very enlightening, it doesn't measure the quality of the content. You must have a story that connects emotionally to your audience if you want their interest to continue.

That’s why my parting advice is to think of your account on Twitter like it’s a broadcast or cable TV network. If you want good ratings, you have to have a constant stream of programming that’s captivating and easily accessible.

Think of the best shows you’ve ever watched and why you keep returning to them. If you're compelling, your audience will find you and keep coming back. And remember, if you stop tweeting or only do it on an irregular basis, there are 6,000 other pieces of entertainment they can watch on Twitter every second.