What This City Needs Is A Tagline. With A Capital “T.” 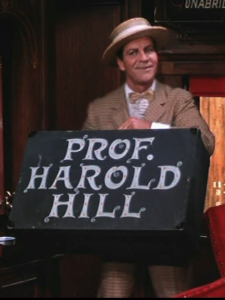 We got trouble! Right here in River City! With a capital T that rhymes with B, and that stands for brand positioning.

Working with cleantech companies means I'm often in meetings with scientists and engineers. By nature, they are very analytical people, which is why they are excellent problem solvers. And in advanced mathematics, there is always a right answer and a wrong answer: Black and white.

I, on the other hand, talk about subjects that exist in more grey areas, and this makes me a quasi-Professor Harold Hill in many of their eyes. And near the top of the list of marketing strategies that set off their flim-flam alarm is the tagline.

The first objection I generally hear against spending time and money developing a tagline is what I call the appendix argument: it doesn't serve a purpose, and I'll be fine after it's taken out.

I take objection to the first part of the logic of that argument, and while it's true, there is a line of successful companies that didn't employ a tagline, you should think of a tagline much like the body's core muscles. They're vital to the posture of the rest of the body, and without core strength, the kinesthetic chain of movement will always have a hitch.

Enough with the anatomy lesson. Let's move on to the second response to the flim-flam alarm.

Cleantech companies are generally in the B2B space, so their audience runs from governments to large industrial users and manufacturers. And so the tagline pushback is, "Our customers don't make decisions on fluffy marketing. They only care if what we make will scale, and if its cheaper than their current solution."

My pat comeback is to ask my interlocutors what kind of car they drive? Unless the answer is a 1992 Honda with no floorboards, I ask them why they bought that particular car since they all come standard with four tires, a steering wheel, and windows. Whatever response they give, it's subjective. Sure, one might have better gas mileage or is rated better in Consumer Reports, but overall all purchases are personal and driven by neurons in the frontal lobe, which controls emotions. There is no such thing as rational consumer behavior.

The sharp ones parry back by reminding me a car purchase is a B2C business, and they operate a B2B company. While I'm a mediocre chess player, at best, this is when I bring out the queen from the back row.

"Are all of your customers fully automated and driven by AI?" I ask. "Because if I'm not mistaken, human beings run every Fortune 500 company: a CEO, a Board of Directors, and the like. People make those choices, not organizations, and like everyone else, while they care about price and engineering, their brain is telling them to pick the equivalent of the shiny red one because it's their favorite color."

If there were no such things as biases, CEO's would never get fired for making a wrong decision.

What'll That Tagline Do For Me, Professor Hill?

I've overcome the objections, but I've yet to close the tagline sale. So if you can turn the alarm down just a bit, let me explain.

A tagline helps define your unique value proposition. Too often, it's confused with what your company does, when in fact, it's about the reward the buyer gets for working with you. It's the ethos underlying the company that's relatable to the customer. It defines you, and only you.

Why is that important? Unless you own a monopoly in your industry, chances are there are other companies on the market who have, who are, or who will be working on similar technology. What separates the companies in this space?

Going back to the car metaphor, they all have some standard features like tires. But Porsche, for example, wants to capture the imagination of the thrill seeker. That's why their famous tagline "There Is No Substitute" separates them from Volvo, who appeals to those more conscious about safety. Volvo's tagline? "For Life."

You need to carve out space for your brand in your particular niche so the audience can understand why they should buy from you. And if you don't do it, one of your competitors will, and your company will have to compete on their terrain. Imagine if Volvo tried to fight on the thrill-seeking axis? They would come up short every time. Instead, they want other companies to have to compete on safety--Volvo's strong suit.

Let's use the example of the highly competitive battery storage space. There are lithium-ion batteries, zinc batteries, and redox-flow batteries. All three are battling it out to become the default storage system for renewable energy generated by wind, solar, and hydropower, as well as the electric vehicle market.

To simplify things, I won't delve into the various subtypes of each of these technologies or dozens of companies within each of these spaces because it would take too long. We'll stick with the three major technologies and show how a tagline would help differentiate their technology from the other two.

Again, these descriptions are intentionally vastly oversimplified for the sake of brevity.

So how would a tagline help differentiate them to the market they wish to serve?

From the customer's point of view (a utility), they are looking for a low-risk, reliable, cost-effective solution that can integrate with the rest of their grid and power generation. What does that mean is crucial to them?

Are they concerned about longer-term drawbacks like degradation and scarcity of materials? Much less so, especially in such a volatile industry.

If I'm the CEO of the lithium-ion company and utilities are my primary market, I want to emphasize my company wins on three of the utility's four most important metrics: safety, track record, defensible. Why, because neither the flow or zinc batteries are ever going to be able to compete with me on those metrics. As a result, I'd recommend a simple, straightforward tagline that sums up their pitch.

Is it the most clever tagline? No. But in this case, it doesn't need to be. It does, however, define their unique value proposition in a way that's unparalleled unless there is some Three Mile Island-sized lithium-ion accident.

Before I leave River City with my suitcase, let me leave you with a couple of last thoughts about deploying your taglines.

Decisions flow from a tagline, both internally and externally, from the kind of people the company hires to the design of its headquarters to the color schemes used for branding and marketing. It's the glue that holds all of these elements together, much like a vision statement, but much more concise. It's a foundational element, not an afterthought.

Taglines underscore your sales and marketing because they paint a picture. When someone says, "I'm driving my Porsche this weekend," your brain conjures up an image of someone barrelling down a highway doing 90 with the wind blowing through their hair because literally and figuratively, there is no substitute. That's what you're aiming for: a singular picture in the mind that defines the experience of working with and for your company.

So pick up your trumpet, trombone, or tuba and join the band. If you don't know how to play, I can teach you.