Why Communicating Climate Change Continues To Challenge Us 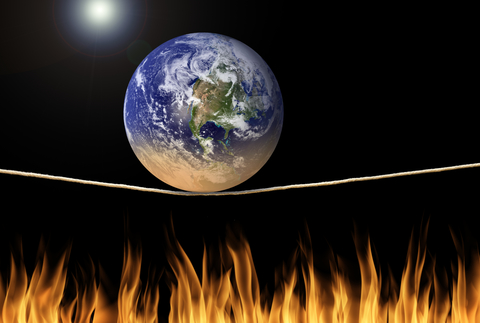 It's the personal, stupid.

Every year, more and more Americans tell pollsters they believe in climate change, yet insufficient action has been taken by business and government to solve the problem. Welcome to the world of the communicating climate change action as seen by Americans of every stripe since Al Gore raised the profile of the issue in his 2000 campaign for the Presidency.

Great strides on critical climate change issues like reduced consumption from energy efficiency and higher gas mileage standards are welcome news. So is the dramatic drop in the price of solar energy and the retirement of coal-generated power plants. Still, it's fair to say progress has been painfully slow and halting.

There's been plenty of prognostication as to the why this transition is so difficult from a policy perspective, but I'm not going down that rabbit hole here.

But as a marketing strategist who spent 20 years creating messages for politicians before I transitioned to working for cleantech companies, I'd like to point out a few of the climate change communications boogeymen that bedevil the movement to reduce carbon dioxide in our atmosphere, and how we can turn on some lights to make the nighttime creepers disappear.

Climate Change Doesn't Matter Until It Impacts Me

Do you want to know why issues like health care, taxes, mass shootings, and immigration rise to the top of voter concerns? It's because those issues are visceral, and they impact people in very personal and emotional ways.

Everyone pays taxes; everyone has a family member who had a health scare, and pretty much every town and city in America has been impacted by gun violence. "It could happen to me" is a constant rejoinder to every middle-class American who consumes news.

Climate change, on the other hand, is a theoretical issue for most people, much like the federal government's deficits. Sure, everyone says they are against climate change and public debt, but they aren't going to be forced to deal with the consequences. Therefore, it can be put off until tomorrow. Today, I have bills to pay, errands to run, and a family to feed.

The Recipe For Communicating Climate Change

So how does the climate not just become top of mind, but the top of the action item list?

Certainly, as floods, forest fires and heatwaves continue to increase, the desire for action on climate change has become more intense, but climate activists are still using an incomplete message to drive the necessary policies forward.

Since there are always too many cooks in the kitchen anyway when it comes to political communication, here's my recipe to communicate a crisp climate message.

History has shown fear is a potent motivator. Video of ice sheets cleaving and melting in Greenland; people are dying from heatwaves in Anchorage and Moscow; asthmatics wearing facial masks while choking downwind from forest fires; hurricane-ravaged communities; and bug infestations in places never before seen. These are all compelling images that replace the theoretical with the actual, and instills a sense of dread in every human being, no matter their age, race, or socioeconomic status.

Why is that fear so compelling in changing hearts and minds?

Neuroscience research has shown there are two neural pathways from amygdala, which processes fear, to every one neural pathway that fires from the frontal lobe, which processes reason. So while we've had a survival instinct since before Lucy, our mechanisms for reasoning evolved much more recently and have less capacity to transmit signals. Fear of having your life wiped out by climate change related fires and floods are very effective persuasion tools.

Ironically, it seems to me it's always the smartest climate activists who reject neuroscience because they believe in the Aristotelean notion of argument based in fact and logic. For that reason, I propose we overcome our first and most self-inflicted problem by renaming the amygdala the "ancient brain," which evokes wisdom, so we can get this group of otherwise highly functioning advocates over their need to be right at the expense of winning.

In another twist of irony, one of the best allies the climate community has to make its case for change are the same wall to wall cable news channels credited with debasing our democracy. Due to their constant need for ratings and eyeballs, coverage of extreme weather events, bug swarms, and diseases get more coverage than ever.  It reinforces the narrative of troubling changes across our planet and an urgent need to act.

You know that record typhoon barrelling down on China this week? Make it trend on Twitter. Editorializing is not necessary when mothers are carrying their children to safety through flooded streets. No amount of bellyaching about Donald Trump (while richly deserved) will be anywhere near as effective.

What Do Bread and Butter Have To Do With Communicating Climate Change?

No, this isn't a screed about industrial-scale farming or condemnation of the dairy industry. In fact, I would recommend climate change activists stop vilifying cows. People love cows. Next to cats and dogs, they are the most popular animal on the internet.

Hating on cows reinforces the image of climate change activists as mean and petty scolds, an no one wants to listen to a hectoring lecture. I get that cow emanation are a significant source of methane emissions, but the average age of people who want to hear about cow burps and farts are seven-years-old (or viewers of South Park). Not exactly a massive voter demographic.

Communicating the dangers of climate change requires connecting the dots to self-interest without abstraction. Instead of telling people to toss the cows off the ark to keep the water from rising, inform people the price of milk, a daily staple in most diets, is going to double along with their produce and poultry if we don't take meaningful action.

Most families live on a budget. For too long, fossil fuel interests have been unopposed in appealing to the necessary and self-interested choices families have to make every week by claiming colossal price increases in the cost of gas and electricity will result from carbon-reducing remedies. And every time coal and oil companies put out that piece of cheese, climate activists frustratingly take the bait and argue a point they can't possibly win because it's true. That's called fighting in a losing frame.

Every time they use their billions in profits to scream "High Gas Prices!", our counter-argument is NOT that more people should drive electric vehicles. The rallying cry retort is their product is causing drought and floods that will drive up food prices if we don't act.  Make the choice between spending an extra $20 gas per week versus paying Whole Foods prices to feed your family every week if we don't act swiftly and decisively.

Fossil fuel companies convince lower-income voters to side against their own self-interest by asking, "How do you like those apples?" while pointing their index finger at Tesla driving, cappuccino drinking, tech-savvy urbanites as the enemy of the proletariat. For once, instead of taking that poisoned cheese, I wish we would take a collective deep breath, check our own self-image and calmly reply, "Thanks, but we can't afford to eat apples anymore because your product ruined the crop." Instead of arguing over gas prices, make fossil fuel companies explain high food prices thanks to their product.

Communicate Climate Change With Urgency And With Words People Can Understand

No one was more surprised than me to read the Republican Party's message master, Frank Luntz, showed up on Capitol Hill to speak to the Special Committee on the Climate Crisis about breaking down partisan barriers and taking action on climate change. Luntz is the same man who advised the party to take up a strategy of climate science obfuscation during the George W. Bush administration.

Do you know what drove this political svengali of climate denialism to this committee hearing? A come to Jesus moment when he had to evacuate his own home in Southern California due to a rapidly spreading wildfire. (See my first point about personal impact.)

Luntz brought a chart of climate-related "Words To Use And Words To Lose." While I don't agree with him on every point, his overarching principles were spot on. For example:

It's not that complicated. When climate advocates talk about the benefits of a clean economy, use words everyone favors. After all, who doesn't want to be safer or healthier? When discussing the threats, use accessible words that everyone opposes. Carbon emissions, while technically accurate, is ambiguous; but even children understand the words 'pollution' and 'threat' isn't good.

We Win Either Way

The esteemed writer and New York Times columnist, Thomas Friedman, has articulated the case for transitioning to a clean energy economy longer and better than just about anyone else. At its core, he defines taking action on the climate crisis as a win-win strategy. Frank Luntz used a similarly useful phrase, the "no-regrets strategy."

Their description of a worst-case scenario paints a picture of scientists being wrong about climate change, but Americans still having cleaner air, cleaner water, less dependence on foreign fuels and an economy that continues to produce new jobs in new industries. And if scientists are right, Americans get all of those things and avoid the most catastrophic environmental problem in the history of mankind.

Embedded in this argument is the belief people can change their destiny, the crescendo of any good speech or movement that arises from the destruction of the old order.

As a reminder when fits of despair hit, the evolution of cigarette smoking had a similarly frustrating and decades-long arc before people's attitudes and behaviors changed. And make no mistake, people's opinions about the reality and causes of climate change are moving in the right direction. Now that we have the scalable technology, we need the right language more than ever to rally a slumbering nation to action.